Albo has a meaning "Zero" in Ge'ez. So why Zero?
Zero is a mysterious number. For centuries people (Mathematicians) did not consider zero as a number. The Indian born Mathematician Brahmagupta (598–c.670 CE) was the first who considers zero as a number and do the arithmetic. Even if there were some gap in his arithmetic, his work was very clever so that we are using it in our today mathematics.
After Brahmagupta mathematicians start to zero as a number. Then-after Zero start to play an important role in mathematics.  Some results in mathematics would have been impossible with out the number zero. So is not Zero(Albo) worth-naming?
"God made the integers, all else is the work of man."-Leopold Kronecker 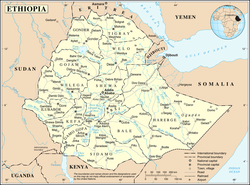 Something About Ethiopia [Wiki Article]
Ethiopia (ኢትዮጵያ) is a country located in the Horn of Africa. It is bordered by Eritrea to the north and northeast, Djibouti and Somalia to the east, Sudan and South Sudan to the west, and Kenya to the south. With over 93,000,000 inhabitants, Ethiopia is the most populous landlocked country in the world, and the second-most populated nation on the African continent. It occupies a total area of 1,100,000 square kilo meters (420,000 sq mi), and its capital and largest city is Addis Ababa.

Ethiopia is one of the oldest locations of human life known to scientists and is widely considered the region from which Homo sapiens first set out for the Middle East and points beyond. Tracing its roots to the 2nd millennium BC, Ethiopia was a monarchy for most of its history. Alongside Rome, Persia, China and India, the Kingdom of Aksum was one of the great world powers of the 3rd century. In the 4th century, it was the first major empire in the world to officially adopt Christianity as a state religion.

Ethiopia derived prestige for its uniquely successful military resistance during the late 19th-century Scramble for Africa, and subsequently many African nations adopted the colors of Ethiopia's flag following their independence. Ethiopia was the only African country to defeat a European colonial power and retain its sovereignty as an independent country. It was the first independent African member of the 20th-century League of Nations and the UN. In 1974, at the end of Haile Selassie I's reign, power fell to a communist military junta known as the Derg, backed by the Soviet Union, until it was defeated by the EPRDF, which has ruled since about the time of the collapse of the USSR in 1991. Ethiopia has mantained one of the oldest and most powerful armed forces in Africa  and in the rest of the world  throughout till this day.
Ethiopians have their own alphabet as well as numeral system. The followings are the first ten numbers starting from one
﻿                                     ፩
፪   ፫
፬    ፭   ፮
፯    ፰    ፱    ፲ ﻿

The History of Ethiopian Mathematics needs an extensive research!
Powered by